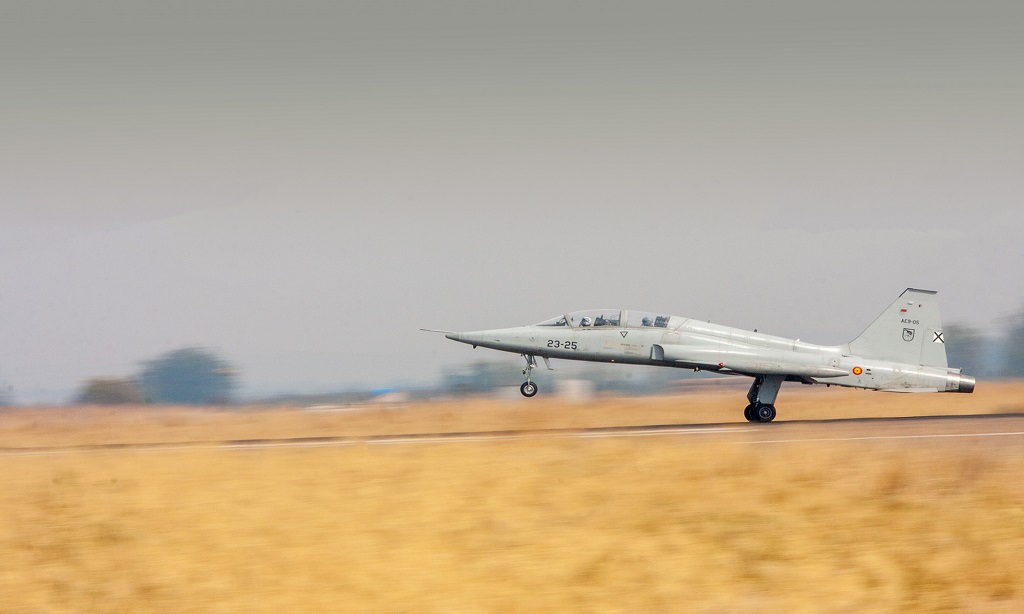 The quality of the device matters very little. The success of the mission depends on the pilot who manages it

The Talavera la Real airbase is the headquarters of the 23rd Wing, the Fighter and Attack Instruction unit of the Air Force. It depends organically on the General Air Command (MAGEN), operationally on the Personnel Air Command (MAPER) and also depends on the Air Combat Command (MACOM) for Force preparation purposes and when due to their capabilities they can act as combat units or combat support.

The unit was founded in December 1953, but it would not be until the following year that the so-called School of Reactors was created, located within it, its first chief being then Lieutenant Colonel José Ramón Gavilán y Ponce de León and succeeding Chronologically to date, a total of twenty-five colonels in command of this unit.

Later in 1958 the unit was equipped with F-86 Saber aircraft. This aircraft was in service at the Reactor School until November 1970, taking part in 32 jet courses and having completed 27,029 flight hours.

In 1970 the Northrop F-5B arrived (manufactured in the Spanish facilities of CASA) to replace the F-86 and T-33, discharged in 1969 and 1973, respectively. With the incorporation of these aircraft, the teaching was extended to the combat phase —tactical formations, low-level navigations, confrontation maneuvers and target approaches—. In March 1987, the Reactor School adopts the current name of Wing 23, an Air Force Fighter and Attack Instruction unit.

Throughout its more than 60 years of history, this educational center has carried out 108 Hunting and Attack Instruction courses, in which more than 2,000 students have participated. Since its creation, the unit’s effort has translated into 250,000 flight hours, of which more than 162,000 belong to the F-5. This aircraft is perhaps the fighter that has offered the highest availability with respect to its cost of all those that have passed through Spanish aviation.

The creation of the School was the response to the need for new teachings for the training of the pilots that would make up the Fighter units, equipped until then with conventional material and which, from 1953, began to have modern jet aircraft.

At the beginning of 1954, the first six T-33A ‘Shooting Star’ aircraft landed at the Talavera air base, as a result of the first Hispanic-American agreement signed in 1953, and which would form part of the fleet of the School of Reactors, taking carried out the first course for fighter pilots in 1955.

The T-33 aircraft was in service at the aforementioned School until November 3, 1969, being used in 49 jet courses and having completed 79,297 flight hours.

It is pleasing to point out that, during the years of teaching in this unit, five female second-lieutenant students have taken the Hunting and Attack course, of which Rosa María García-Malea López, the first woman to take the aforementioned course and who currently belongs to, should be emphasized. to the Águila Patrol and to Rocío González Torres, number one in her promotion.

As a most relevant fact, it should be noted that on September 7, 2015, the unit received the Medal of Extremadura for its exceptional work by and for the Autonomous Community of Extremadura since its creation.

The Talavera la Real air base has been designated the Main Operation Base of the RPAS (Remotely Piloted Air System) Predator-B, a system of which 4 units have been acquired, which began to arrive in Spain at the end of 2019. To start up full operation of the system, an implementation plan is being drawn up, which will imply for Wing 23, among other things, the conditioning of its infrastructures to the needs of the new weapons system.

Wing 23 currently has a dual function: educational and operational. The first refers to the standardized teaching of hunting and attack in its air-to-air and air-to-ground combat aspects. In its operational facet, the Unit participates in various exercises in support of the instruction of the Air Force Units.

Every year, a selected group of fifth-year second-lieutenant students from the General Air Academy acquire a common base in Talavera to start the training period in any of their future destinations: the Air Force fighter squadrons equipped with F- 18 and EF-2000 Eurofighter.

Its personnel participate in different international missions, such as those carried out in Afghanistan, Lebanon, Central Africa and Mali.

The Talavera la Real Air Base has been designated the Main Operating Base of the RPAS (Remotely Piloted Air System) Predator-B. Work is underway to launch the full operation of the NR.5 system, which represents a notable increase in intelligence, surveillance and reconnaissance (ISR) capacity for the Air Force and joint action, by to have a class III remotely manned platform with an autonomy of more than 25 hours of flight and to carry out ISR missions using infrared and radar sensors, to search, locate and follow targets in any weather condition, fixed or mobile, both by day and at night. All this being able to conduct the mission hundreds of kilometers from the takeoff base or another enabled location.

Flag of the 23rd Wing

On May 20, 1956, it was carried out between de la Bandera and the Talavera la Real Air Base.

On December 10, 1988, the Standard was delivered to the Wing 23 of Hunting and Attack Instruction by the Assembly of Extremadura.

Tie of Honor of the Spanish Association for European Development

On October 15, 2001, the Spanish Association for European Development imposed the Honor Tie of said Association on the Banner of Wing 23.

On May 29, 2014, the Talavera la Real Air Base was awarded the Occupational Risk Prevention trophy in its 1st category.

Army of the Air Award for Excellence in maintenance collectively

On November 8, 2017, the Air Force Award for Excellence in Maintenance was awarded collectively to the Non-Destructive Testing Section of the Material Group.

On November 29, 2019, the Air Force award was granted to the air base collectively for the handling and maintenance of firearms.

On November 30, 2000, the Junta de Extremadura awarded the Unit the Prize for Occupational Road Safety (safety and health at work)